skip to main | skip to sidebar

Light Drawing - How to Do Light Graffiti 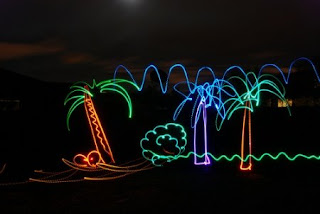 One hot new trend in photography is a technique called "light drawing" or "light graffiti." You've probably seen it in photos, videos, print ads, and even TV commercials. The process basically involves using long exposures in a dark area with a digital camera and LED or other light sources.

Unlike typical graffiti, this technique isn't illegal and doesn't cause property damage. It's essentially another form of time-lapse photography.

Before you start, make sure you have a digital camera that had manual settings. Some smaller/cheaper point-and-shoot cameras don't have this option. You'll need to change the shutter speed so that it stays open longer. And as stated previously, you'll need a light source (LED, flash light, glow stick, etc). A tripod also comes in handy because the camera needs to stay still while taking the shot.

Change the settings so the ISO is 100, the shutter is open to the widest aperture, disable the flash, and the exposure should be 10-30 seconds. You will also want to set a timer so you have time to get in front of the camera.

Hit the button on your camera to start taking the picture and get in front of the camera with your light source. If you set a delay, you might want to wait until the timer is up if you're drawing something specific (like letter, for example). When you're ready, start waving the light source around to "draw" your graffiti.

As you move around, your body will end up being a blur or ghost like figure in the actual photo (if at all). The light source will create streaks of light. You can draw shape, letters, and other designs. Just use your imagination and experiment with it.

One technique you can try is having another person stand perfectly still in the photo while you draw around them. You can point the light source at your face or other objects to create interesting reflections in the photo.

It's a lot of fun creating light graffiti in public because nobody will complain about your "drawings." They only exist in the photograph. You might even get some strange looks from people who have no idea why you're waiving a light at a camera!

Posted by karlak at 5:03 AM No comments:

Labels: Light Drawing - How to Do Light Graffiti 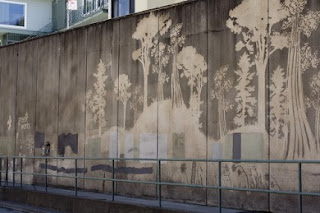 How to Graffiti - Reverse Graffiti

It is currently taking form via guerrilla marketing all over the world. As competition with businesses escalates to a more global position, the standards of current advertising campaigns are growing old.

Advertisers are now scrambling to form new ways to grab peoples attention over the television ads that used to work so well. Recent CBS reports have suggested that a person could see up to 5000 advertisements in a single day, wearing on a mind, and making the world hesitant to buy any product through an advertisement.

Marketers need to find new ways to stand out.

How To Graffiti: Reverse Graffiti

One new advantageous method of advertising that seems to have taken popularity with marketers has been with the use of reverse graffiti. Reverse graffiti is the concept of a non-damaging form of graffiti (i.e.: Reversible). It allows for people to leave messages, without the defacement of any property. Many of these forms of graffiti are literally cleaning art into surfaces.

It creates art, while cleaning the environment.

It makes an important statement.

There are many forms for this reverse graffiti, and I will discuss some of the more common methods below. Please note that these forms of graffiti are simply described here for informational purposes. It is intended that if you use this information to create your own street art, you do so on your own property, or you receive permission to do this on another's property.

Perhaps the most popular of all of the forms of reverse graffiti, dust tagging involves removing dust/grime from surfaces, typically with a cloth and some soapy water. Basically, an artistic dusting, as you literally clean your images into the surfaces of objects. Dust tagging has also evolved to include cleaning compacted dirt that layers on roads, though the dirt is typically packed onto the road more tightly - a power washer is required to lift up an image.

Dust tagging is common to be placed on opaque walls, or transparent surfaces, allowing for the dust vs. clean to really contrast with each other.

Horticulturists discovered a way to create a "moss paint" to paint on surfaces. This paint once prepared, paints a layer of moss and nutrients on any surface. Under the proper growing conditions (shady and moist areas), the moss paint grows out to a fully grown moss, in 2 weeks. It also keeps the original design of what you painted! The texture adds a sharp contrast to any design, and it remains a fantastic, eco-friendly way to create graffiti.

This form of reverse graffiti has been around since around 1991, and involves leaving stencils on buildings for long amounts of time (2 months or longer). It is a stencil art, without the paint. This is mainly a "city-only" type of graffiti, as cities are typically the only places with consistent amounts of smog to layer up on the sidewalks and streets. When you finally remove the stencil, there is a contrasting design of all the smog pile-up vs. the cleaner surface of the covered building.

Light graffiti is something that seems like it never stopped evolving. There have been multiple forms of light graffiti, from using projectors to cast images onto buildings from far away distances, to using cameras with slow exposure times in order to manipulate pictures while they are being taken.

Projectors - Created by the Graffiti Research Lab, the forms of this involve a laptop/projector combination hooked up to a car battery, or electrical outlet. The computer has software to design your own graffiti tag, and allow the projector to be cast onto buildings.

Cameras - Made popular recently by the rework by Michael Bosanko, this form of light graffiti involves a camera with a long exposure time (can be 10 seconds, up to an hour). By having a long exposure time, you also have the time to run into a picture being recorded, and manipulate the environment with light. You never physically touch the environment, and are left with awesome photos of a manipulated setting.

Though these are more common methods, the concept is to bring a sort of compromise with both sides of graffiti: to be allowed to have a street art, but to avoid damaging any property. This creates an interesting dynamic, as it allows marketers to more easily enter a cultural art form that at one point in time was deemed inaccessible (mainly illegal) to businesses. The fact that marketing with graffiti has been viewed as taboo as it was, allows for companies who use these techniques now to really stand out among fellow advertisers.

Everything that is created with reverse graffiti can easily be removed, whether it is by flipping a switch to turn off a light, or using a light soap and water combination to clean the entirety of a surface. Not only easily cleanable, it remains more environmentally friendly than many artistic ventures.

If any of this has really grabbed you, I really suggest getting out there and trying it! Reverse graffiti is another great way to not only learn a new street art, but to also look into one of the future areas where marketing will inevitably head.

Ziggy Chu is a graffiti enthusiast, and working performance artist. He is currently finishing a bachelor's degree in Chemical Engineering and studying in Stockholm, Sweden.

The websites below follow Ziggy's own experiences and recommendations with all forms of graffiti. Check them out now to learn more on how to graffiti!

Posted by karlak at 5:02 AM No comments: